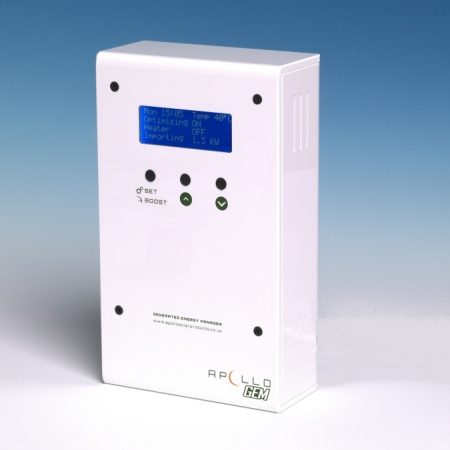 The Apollo GEM system is the most advanced, accurate and versatile micro generation load management device in its class.

Apollo GEM can divert surplus generated PV or wind power which would have been exported to the grid to produce hot water, run heaters, power a battery charger or any other appliance. It has two outputs, allowing two heaters or other appliances to be connected to the system.

In variable power mode the system accurately monitors the power being imported or exported to the property and diverts sufficient power into a hot water or other heater in order to keep the exported power to as near zero as possible whilst at the same time ensuring that no additional power is ever imported to supply the heater. Priority is always given to the energy demands of the household appliances and only surplus energy that would have otherwise been exported is stored in the hot water system.

In threshold power mode Apollo GEM uses a programmable threshold to determine when enough surplus power is available from the micro generation system to power a connected appliance. This mode would be used typically to power non-heating appliances that cannot use a variable power supply. Again, priority is always given to the energy demands of other household appliances. For hot water heating the Apollo GEM system uses a standard electric water element.

The Apollo GEM is designed to be close to the electricity supply. If it is intended to install it remotely, e.g. in an immersion cupboard, then you will require either a wireless upgrade kit (offered during checkout at £74.95), or the Apollo GEM-C wireless compact immersion controller.

There are no reviews yet.

Only logged in customers who have purchased this product may leave a review.

You've just added this product to the cart:

Enter code GIVEME10 for £10 off your inverter (online only).
Why buy from us? Our advice is second to none (give us a call). We will cheerfully give our advice on your requirements before you buy. All our products and services include full and free technical support from day one for the lifetime of the goods. Dismiss